0
No products in the cart. 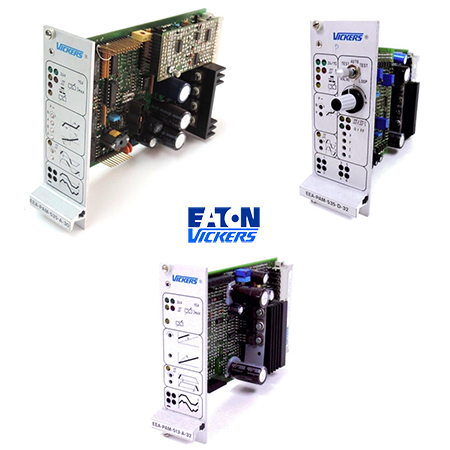 The EEA-PAM-533-D-32 is a power amplifier that is produced by the company Eaton Vickers. Eaton, a power management company, offers energy solutions for electrical, hydraulic and mechanical power. Vickers became part of Eaton in 1999 and is one of the most well known names in the hydraulics industry. Vickers focuses on power and motion control systems and components for hydraulics. The device is part of the Vickers D-32 series and is based on a previous model in the Vickers A-32 series. Several new improvements are included in this device while retaining most of the features from the previous model. This amplifier designed for use with the KF*G4V-3 valve.

The Eaton Vickers EEA-PAM-533-D-32 has a nominal supply voltage of 24V. The output control voltage is around 15V. The amplifier has an acceptable current range from 0 to 20mA and has a mass of 0.40 kilograms. The input module of the device has four sockets and includes a ramp function generator. The ambient operating temperature for the amplifier ranges from 0 to 50°C and can be stored at temperatures ranging between -25 and 85°C.

One of the main new features of the EEA-PAM-533-D-32 is the PID feedback modules. This addition allows the user to set desired control values, which the amplifier automatically adjusts itself to meet. There are also DIL switches and potentiometers which the user can use to adjust settings regarding how the device functions. The installation process for amplifier is relatively simple, as it features a similar layout to previous models. The design of the device has been improved and is a Eurocard form factor. The amplifier also includes a built-in test function.

Some common misspellings of EEA-PAM-533-D-32 are as follows: